It went well I think, it felt good and reactions were positive. That must count for something ;-)
Now I'm awaiting the results from the survey held afterwards...exiting!

Here are some pics of me during my presentation on Capgemini's TestEvent 2009 and during the 'thankyou's' at the end. 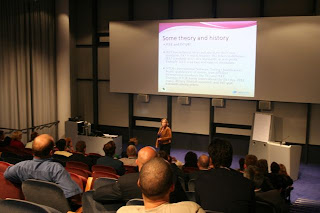 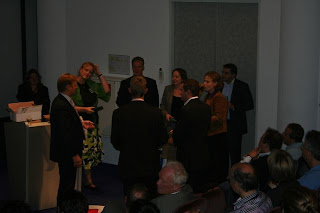 According to the article there was a near-collision at Rotterdam with the new high speed train (Fyra) and an intercity from the Hague.
The journalist [Harry van Gelder] writes that the incident happened about 23.30h.

That rang a bell...because that makes the whole article one great farce! And I checked the one fact that made my bell ring:

The last high speed train leaves Rotterdam at 22.00h. (and yes, I know that traines do have a tendency to get delayed but not an hour and a half on a distance of a mile)
So how on earth can it be that de high speed train and an intercity nearly-collisioned at Rotterdam? The only possibility here is that the train mistaken for the high speed train was the normal Intercity between Brussel and Amsterdam, which leaves the Rotterdam station at 22.08h.

I tried to leave a reaction at the newssite of the Telegraaf but for some reason they keep refusing the message....I wonder why they are censuring me?
I think Harry should have tested his info first, before writing this article and making himself guilty of pure rabble-rousing.

I did some further investigation on the near-collision article.

There was a TESTtrain (new material V250) driving from the HSL track TOWARDS the Rotterdam station (thus not as in the article is stated 'FROM Rotterdam'), it COULD have been around the time of 23.30, but this is still under investigation.
Certain is that this train is not a train in the regular train time table but an extra train due to testing.
This testtrain however was not driving fast or 'raging' as the journalist states, it was especially and carefully regulated over track-network just because of the fact it wasn't a regular train in the timetable.