A visit to the DutchTestingConference 2010

It's Wednesday 21st of April. Today is the first edition of the Dutch Testing Conference at 't Spant! in Bussum and I'll be attending it.
There where also two tutorial days, but I didn't actually got to register for those because I only heard later on (from a colleague) that these where actually held [shame on the marketing of DTC...]

Before I can go there I have a LOTUS job, so I arrive just before the first coffeebreak. It seems I haven't missed a lot, most people I talk to say that the keynote was very 'dry' stuff; you could also read the slides and know just as much. It seemed that the speaker just read out the tekst on the slides. I haven't seen it myself so I'll have to take their word for it. Alas this keynote is one of the presentations that aren't downloadable from the site (it only shows the abstract) so I'll never know.

Sogeti has some sweet little cakes during the coffeebreak. Apparently they have 'sold' their 100.000th book (http://eng.tmap.net/Home/archief/958058.jsp) if you want to see the picture look at the Dutch version of the article (http://www.tmap.net/Home/archief/858036.jsp), because there is a picture on the NL but not on the UK version.

After the break I attend the track: FEAR: The psychology of software testing, by
Rik Marselis of Sogeti. I like Rik as a speaker and I'm alway curious on what he has to say. 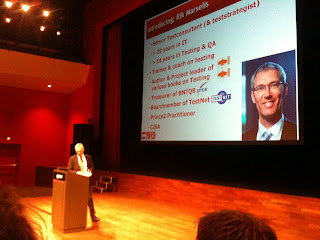 Rik doesn't dissapoint on the point of presentation and fun, but on content I found the presentation a bit light. I liked the idea of using the 7 habits of Highly effective people by Covey and the thought on the fear of the unknown. I also liked the 'testers happiness curve'. 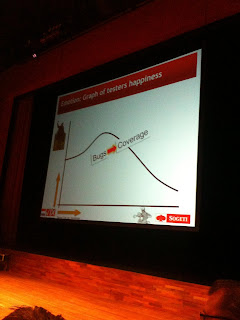 But to be honest, I had a little trouble with the 'red line' in the whole presentation and the 'what's in it for me'. Maybe my expectations where just too high.

The next track: Omgaan met complexiteit by Peter Wanders, KLM & Boukje van Tulder, Logica was far worse, it made the presentation of Rik rather excellent material.
It was a shame to see that the whole presentation was set up around development and test and the business (focus of DTC is Business-audience as far as I know) was completely ignored. At some point an idea grew in my mind about a tool that was shown so I have to admit I was at some point inspired, but the rest of the presentation didn't even slightly live up to my expectations. Apparently the complexity adressed was the complexity in end-to-end or chaintesting, coping with these was adressed by suggestions. When I asked the question about how the business perceived these suggestions when implemented (did they find it usefull, did the see advantages regarding transparency etc.) the answer was that 1. they didn't implement all suggestions (so no experience but only theory) and 2. apparently the suggestions implemented weren't validated with business in mind, the answer given was just to uncertain.

I went of to lunch a bit disillusioned. Lunch itself was good though. Quality of the food was excellent and the organization made sure we had healthy stuff with all the fruity drinks and smoothies that where there.
An attempt for a 'tweeting' failed alas. I only saw three tweeps at the entrance of the DTC so that was a pity.

I walked around the expo a bit. Met up with a lot of testcolleagues and chatted a lot (no I won't say anything about what I know about the EuroSTAR programme ;-) ). There was champaign at Polteq who celebrated their 10th anniversary. And I filled in a card for the lottery to win an iPad at Systemation/ iTKO-LISA.

Full of good hope I went to the afternoon keynote: The Dolt's Guide to Self-Organization by Jurgen Appelo of Sociotoco. (http://www.noop.nl/)
It started out rather good, people where really enthusiastic there and didn't have any trouble with the dreaded 'after lunch dip'. Slide deck was good, dynamic.
Some quotes and phrases where absolutely brilliant: "That is like teaching people all about fruit flies, And then lumping everything else together in the group of… non-fruit flies". 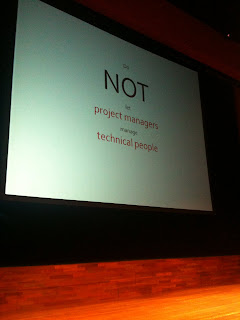 “Self-organization is a process of attraction and repulsion in which the internal organization of a system, normally an open system, increases in complexity without being guided or managed by an outside source.”
Alas, after twenty minutes or so the presentation style of Jurgen seemed not to win of the after-lunch-dip for several attendees. The two gents on either side of me dozed off (when mentioning this later on one of the 'dozers' said "I was in deep thought on the content of the presentation" ;-) - yeah right). For those who read this and want to catch up: this presentation was based upon an upcoming book about Management 3.0: www.management30.com

After a coffee break, again with the healthy touch of fruit, fruity drinks and smoothies.
I went to Beyond Agile Testing, Sander Hoogendoorn, Capgemini. I saw his presentation on the COP Testing of Capgemini and I was curious in what way he changed his presentation with the given suggestions and to give support. There's no doubt he is a smooth (and FAST) speaker. Although the contents is now a bit too familiar for me, the overal respons of the audience seemed to be positive and I saw a lot of positive nods here and there. I like some dept, which wasn't in this presentation, but in this case the audience and the purpose (business scope) made this presentation just right. Time management is still an issue with Sander, with an overrun of 5 mins. So no time for questions and a shorter break, which little people seemed to mind.

The last track I visited was Defect Prevention: a wake-up call by Geert Lemmens, Coralius NV. I guess I missed the wake-up call here. I really like everything with defect management, defect prevention, the IEEE 1044 and so on, but the presentation just wasn't inspiring or invigorating. Reading the sheets, no interaction with the audience, in short: boring. How difficult can it be to insert some examples and make it applicable? Some of the other attendees probably felt the same because some critical questions that where answered received some dissaproving nods.
Underneath are some sheets, the first one is rather funny I have to say. 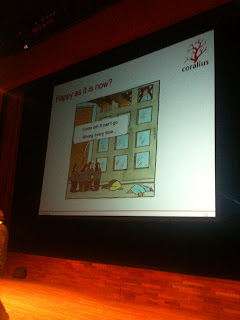 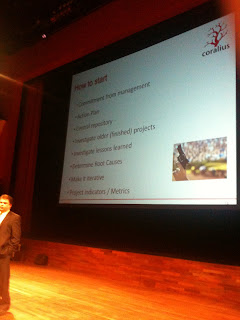 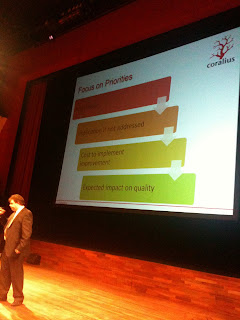 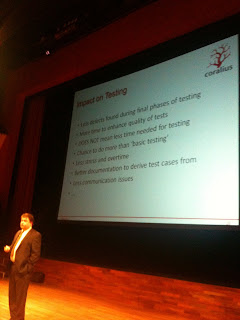 After the tracks there was a 'meet and drink' in the expohall (more chatting! and no: I still won't say anything about the EuroSTAR programme...).
There was also a prize for the best presentation. Which was 'Omgaan met complexiteit by Peter Wanders, KLM & Boukje van Tulder, Logica. I honoustly have no clue how the expert-panel came to this presentation. Was the rest thát bad??? I don't mean to offend anybody, but seriously I see some submissions on the program that must have been - no doubt about it- better.

After this prize a couple of vendors that where on the expo found it nescessary to also hand over their prizes. Sogeti had five winners for their Lecture Dinners, Google had a lot of prizes (by lotery) for a lot of people and Systemation had a lottery for the (very wanted) iPad. I found that the timing and the place were wrong. There should've been only the 'best presentation' (should have been the highlight) and prizes from vendors should have been done before that or at their own booth.

My first article in print

With thanks to Julian Harty and the crew of STP Collaborative!