I woke up with a major headache, maybe it's the tension for the track I'm doing today. I only had 1 cocktail during dinner and 1 pint of beer last night, so it can't be the booze acting up. Well, nothing a good old Aspirin can't fix.
I had to be at the conference centre at 0730 again to practice the last GMM session already. Today I'm again pointing out the Testlab, since it's an excellent place to be at to test and meet people and I'm highlighting the European Testers Survey in my weather report. I'm also sneaky referencing the closing event. I'm all into the details and it's going to be such fun! Before I went to the conference centre I picked up a huge eggnog latte at StarBucks, I love these different flavours in foreign SB's (I had a Pumpkin spice in Portland), it's a shame they don't have them in the Netherlands. 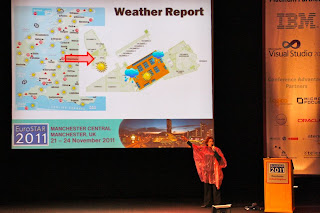 Photo by Rik Marselis: Me as weather girl on the big stage during GMM session.
The keynote was that of Ben Walters, I didn't notice it, but apparently he was as sick as could be and he just came out of bed to do the keynote before returning to it again (chapeau dude! I take my hat off for you if I'd wore one). It started out promising, but as Twittering and mailing increase, mark a period of my declining interest, I must conclude I was losing my interest half way the talk. My headache came up again so I wished for the track to end so I could pop an aspirin again. I got more stressed for my talk this afternoon...and that took a toll on my attention.

I went to Architecture Testing after the break by Peter Zimmerer. I listened to his talk with interest as I'm busy setting up something on how to do this with an architect at my current client. I didn't get what I expected to get from it though and I didn't agree with the content in a whole, I have a different perspective on architecture testing and it is good that different perspectives are there, but it sucks that this will probably set a new discussion and confusion that goes with it around the subject to get a common (for what that's worth) understanding. I see a lot of evangelising to be done there.

I went to Michael Bolton's dashboards track after that. I had high hopes and expectations, as I learned something new and very applicable every time I visited a track by Michael. I couldn't be more disappointed this time. It might have been very applicable for newbies, but for me, it was (very) old news and the stuff told I apply naturally in my work, as I know most of my colleagues do (and not only colleagues from my company but also most of the testers in NL and UK I know) because they are educated in reporting and giving feedback to the client when you're doing testing. I even go as far as to say I learned a lot of this stuff during my ISTQB course, but maybe that's because I had a good teacher for this course. It's not about the numbers, although a lot of non-ISTQB testers think we ISTQB people are only into 'coverage by percentage' etc. (it's not that bad: it's what you DO with it that counts ;-) ) , I actually learned that you first go to your client/ stakeholders and ask them what their need is regarding the information and reporting during testing and produce my information accordingly. I never use the same reporting for one organization in another, I even got specialized reporting for some specific stakeholder groups if it gets more clear for them or they feel more happy about a certain lay-out. Whiteboards are okay, but I'm having a conflict there when I think about the strict clean-desk policy most organizations have nowadays; they'd get a heart-attack when seeing this stuff all out in the open, it's all in the context and this solution isn't for my context.
I was considering changing to 10 challenges by John Montgomery, but I figured I could relax a bit have a bit and browse through some mail. It wasn't a complete waste of time, so I still was LEAN ;-)

Between that track and the lunch I went to StarBucks to escape and relax a bit. I have to remember to breathe...

My turn. I was nervous, VERY nervous. I've been 'speaking' before but at my Ethics debate the attendees do most of the talking and at my Unusual Testing track there's so much non-testing info, I'm quite sure the oddness protects me somewhat. This time I really felt exposed, I was talking about work I actually done as a tester and I felt I could only be exposed as a fraud or an idiot. Although my client was very pleased with my work (which I find most important) and I'm really proud of my work and want to share my lessons learned because they helped me and maybe could help others (or inspire), I'm still very unsure. It's also my first time on the 'BIG stage', I can tell it's different being on a stage in an auditorium, where seats are going up all around you and a smaller room, where you are the highest point in the room. I'm also not used having an AV team regulating my slides and having a slide-button and separate pointer. I was scared that I would screw up. I was scared switching the devices and look clumsy or making stupid English jokes, that are hilarious in Dutch but are are an insult in English or something. I was SCARED, I was NERVOUS...it went fine.

I had people asking questions, I had a happy client (which was in the room) and somebody that wanted to ask more inside info from an Austrian railway company and even - a first for me- somebody wanted a picture with me (I felt like a rock star :-)) ). I had a headache again, but this time from the tension leaving my body. I let out a sigh from relief and went for coffee.

The last keynote was from Isabel Evans. She still is one of the most inspiring people I have met and she always has always has something to tell that you can pick snippets from to use in your own work. I've never thought of sight disabled people and using IT, although I have a colleague that ought to have triggered me, but now I have really got something to think about. Again the added value of this particular conference is the things that surprise me as I would not have thought about before but really make something to bring home. It's one of the aspects that go in to my custom-made toolbox and check lists for testing questions.

The closing session is finally there. The audience doesn't know yet, but behind their seating is an envelope with a live (a special device that Morton made) or dead bug in it. I know because before my track during lunch, I've been putting them there (together with Derk-Jan, Morton and two Qualtech girls) and after that I sat on every chair (!!!) to make sure they didn't fall out (I still have my upper leg muscles complaining a bit because of this). On one of the dead bugs (encased in plastic) there's the winning number in-scripted for the Golden Ticket to EuroSTAR 2012. My job is to ensure everybody that wants to win this ticket is in the sections where the bugs are. Then it finally starts, the boys are ready and the lights go out... It's a spectacle and it goes exactly as planned. The TestLab is having their time to do the news on the lab. Then the 'bugtime' is there; it's hilarious with screams coming from here and there in the audience. Then it's already over and only the Gala-dinner remains.

The dinner is at 'The Monastery' and its really spectacular, the lighting gives it a very special and awesome atmosphere. There's champagne and there's good company. The choir, including Dorothy Graham and Fiona Charles is singing beautifully and finishes with a few of my favourite techniques written by Dot and specially arranged for the choir. It's magnificent.

The awards are given at the end of the dinner. Julian Harty wins the European Testing Excellence Award and I think it's well deserved. The chair for next year is also announced: Zeger van Hese will be chair for the Amsterdam 2012 edition.

I said my goodbyes at the Monastery, but there was also a drink at the Jury's Inn where I was invited to, so I tagged along with the others and had a good pint (or two) of Strongbows (to finish with what I started the whole adventure with I found that appropriate). I went to my hotel around one-ish and was surprised by one hell of a shower of rain. And of course my umbrella and poncho were still in the bag with weather-girl stuff :-), a bit of an ironic end of the the conference I thought, but what a conference it was... now to wait for a whole year for a new EuroSTAR to start, hoping to see you all there then. 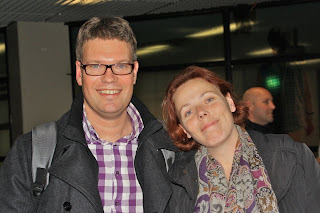 Photo by Rik Marselis: Derk-Jan and Me at Schiphol Airport waiting at the passport control checkpoint
Gepost door FunTESTic op 16:57