Expo:QA 2010 - Warm welcome and conference in a bit cold Madrid, day one

Finally I got a chance to blog on Expo:QA 2010. It's been a very hectic and very busy few days, but now I'm in my hotel room after the conference has closed and have some time on my hands to blog. There wasn't any WiFi at the conference centre (wel no FREE WiFi) so I was also a bit mellow on the tweeting and the blogging certainly had to wait. So, what I've been up to the last couple of days...starting with arrival and day 1. 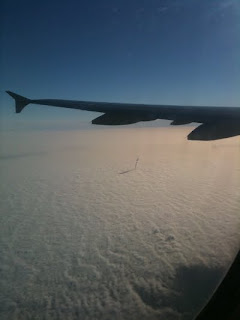 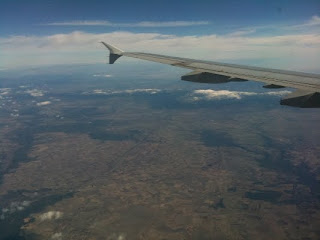 Some pretty pics of the flight from my window

I arrived in Madrid at 14.50 at the airport and was in my hotel (arranged by the ExpoQA people) the Avn. América Meliã (wich is quite good!) at four o'clock. 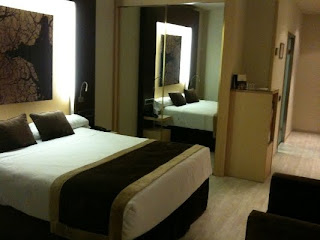 I met Derk-Jan de Grood of Valori in the lobby and we had a social drink before attending the track chair meeting in one of the meeting rooms in the hotel. The meeting was to instruct all the trackchairs on the procedures and the Vota-y-Gana (vote and win) system that would be used by the delegates to rank the different tracks and keynotes.
After that there was a social drink with the speakers and chairs in another meeting room, which was quite nice and informal. The only missing group were the speakers from the UK who were delayed because of heavy fog (I heard they had to wait for 5 hours at the airport to finally depart). Me, Dorothy Graham, Martin Pol and Derk-Jan decided to have dinner at the restaurant only to find out that it wouldn't be open till 20.30, so we had a 'quick bite' at the hotel bar and decided to go to bed early because most of us were very tired or had to work on their presentation some more. When we left, we ran into the heavily delayed UK people finally arrived at the hotel as well.

On Wednesday was an early start. The ExpoQA people had arranged a shuttle bus (coach) to go to the conference centre, which left at 08.15 from the hotel, which was excellent service and very relaxing since I didn't have the stress of having to find a taxi and also could have some chats in the bus with other attendants.
The venue itself is gigantic! The ExpoQA conference itself was held at the North Entrance and was at a first floor level. I found the set up excellent. Four rooms, situated around the vendor booths and two counters where coffee was served during the breaks. Coffee was always sponsored by one of the companies and accompanied by some sweet snacks. 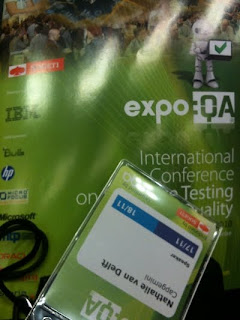 Raynald Korchia opened the conference with a warm welcome to all delegates and at 9.45 the first keynote was held. It was a guest called 'Arnold Aumason'and he told us about worldwide testing services market 2010-2014: Key Growth Opportunities and Sector Trends. I didn't really hear anything new or revelationous here and the voice of the speaker was very monotonous so I couldn't get really exicted about this keynote. 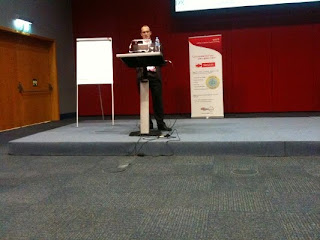 The second keynote was the one of Dorothy Graham: What Managers Think They Know about Test Automation but Don't. I would like to reference to the information on the ExpoQA site (www.expoqa.com) to look into the info. There wasn't any real new information here for me, although I caught some ideas here, but specifically for the less experienced testers this was an excellent track and Dorothy is a dyed-in-the-whool speaker. 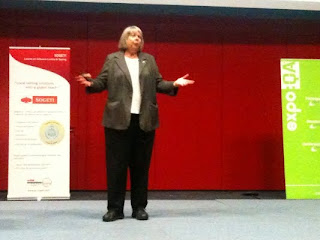 After these two keynotes there was a coffee break, with yummie treats and - for me as 'Dutchy' - a bit weird coffee where normal milk is mixed with very strong black coffee if you want 'coffee with milk' (we know 'cream', but it's an unknown concept it seems here in Spain).

When I finished my coffee and had some chats I had to choose the next track. It was a choice of four each time and this time I chose: The Cassandra Syndrome: The Tester's Dilemma and What to do about it by Rick Hower. He had a very funny anecdote about an embarrassed cat which had sprang into closed pation doors and actually looked embarrassed when he was up on his feet again. It was a very entertaining presentation with some good info and some interesting points, one statement that particularly interested me was "how much truth is too much truth?".
Rick has a site which you can visit on: www.softwareQAtest.com. 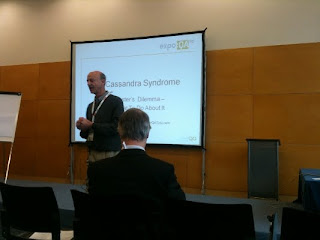 My other choice would have been the track of Derk-Jan de Grood on selecting the most effective test design techniques which - afterwards- got some excellent feedback, but in this case I choose the 'foreign' one that I was less likely to have an oppurtunity to see again. I'd like to mention here that Derk-Jan also received a special mentioning for his excellent abstract that was mentioned the most by the technical committee in the closing of the conference.
The next I chose was the track of Geoff Thompson called 'Testing, so many problems but we have the solutions don't we?". It was about 'craft' v.s. 'profession' and the Dunning Kruger effect where IT suffers from apparently. Some nice expressions from this track were 'Illusory superiority and inferiority' and 'The Silver bullet is YOU'. 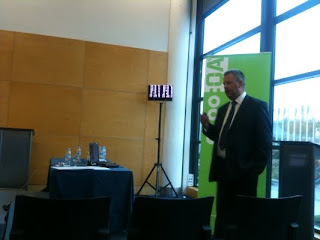 The lunch after these tracks was absolutely fabulous. It was the famous TAPAS from Spain and different small delicious foods were constantly distributed during the (1,5 hour) lunch break. Accompanied by softdrinks and wine!.

It made the keynote after the lunch a though one, heavily fighting off my after-lunch-dip. But the speaker 'Alan Brown' was very good and kept me awake effortlessly. It was about 'Best Practices for Delivering Quality Solutions in a Ditributed, Agile environment' and I would like to mention 'Rational Team Concert' here, that was the main player in this keynote. 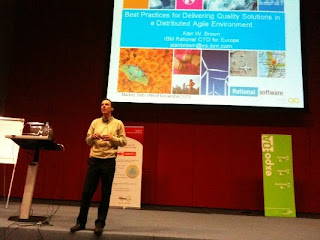 After this keynote I went to Virgina Chalegre about Accessibility Testing Methodology for Visually Handicapped in Web Environments. And I was really intrigued by a tool that read out the text from the screen and the difficulties one with a visual handicap has to face on the www. It was a track in Spanish and it was actually the first time I encountered this 'synchronous translation' and found it brilliant. Oh; also, a website that is suitable for visualy handicapped isn't per definition ugly for non-visually handicapped people. 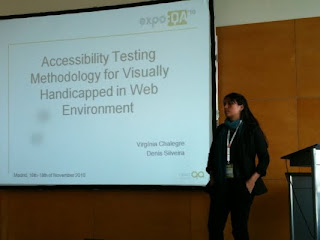 After the coffee break I had a conversation with my co-host (Ewout van Driel) and chair (Graham Thomas). And I was actually 22 minutes too late for the next track. I chose to go to track one (Peter Farell-Vinay with Release Readiness) but in stead rushed into track 2 by mistake. It was in Spanish and I didn't have the translation headphones with me, but also to embarrassed to leave the room again and actually I didn't have the heart to leave the room again. Luckily the slides where in English and I could understand some Spanish words, so I think I got the message of Graham Moran's Test Tool Evaluation and implementation. 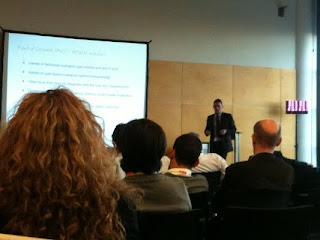 At 18.00 there was a bus to the hotel again, arranged by the ExpoQA people. We were supposed to leave at 19.15 again to the Florida Park to have a Networking Dinner with Flamenco show. But traffic was SO heavy we actually arrived at the hotel at 18.55 and had to really hurry up to get dressed/ have some freshing up and run to the bus again. Well the bus left at 19.30 or so and we had an excellent drink before a good dinner and a great show with - as Isabel Evans stated today- great level of passion combined with great level of control. I wasn't allowed to take any pictures inside, so you have to go and look at this show when you're in Madrid yourself.

I arrived at the hotel at 00.30 and was too exhausted to blog the day and I had to get up at 7 today again so this is why there is such a delay in my experience blogging.
I will blog about today (day 2) later on, because now I will go to dinner (it's 20.40 now) after I have also put the photo's with this blog.