So, it's Friday already, the day after the ExpoQA conference. Just did breakfast with Martin Pol and Niels Malotaux and had some nice discussions about 'testing in the Cloud' or to be precise: the nonsense of this concept without knowing the true and accurate definition of 'cloud' and some other definitions. I'm already checked out and waiting for my husband to arrive, which I do currently in the 'PianoBar' of the hotel (much more comfy than the airport I thought). Time to write part two of my experiences at ExpoQA...


I woke up early on Thursday. Nervous and really still exhausted 'cause of the short night. Had a quick breakfast and ran off to the bus that was already waiting in front of the hotel to bring us to the conference venue.
I had to start this day with my 'Ethics debate', my co-host was Ewout van Driel (Sogeti, Spain) and I was introduced by Graham Thomas. It was tough and had to do some minor adjustments. A debate is especially difficult it seems in Spanish Culture, during the early morning and the simultanous translation is a bit hindering I find and the acoustics in the room were not that great either. But it went OK and the most important - and what gave me a really good feeling- was that people (although they did not perhaps have the courage to speak out in the crowd) were really discussing and debating amongst small groups. Dorothy Graham was my Mystery Guest and I think she did an excellent view on Ethics and Software Testing (thank you Dot!). She also mentioned a book you all should read, called: "Mistakes are made, but not by me". I didn't get 'high-in-the-sky' scores, but feedback was excellent and I think it's very positive sign that most people bothered to SMS (which costs money) to vote (I had 32 votes last time I checked and that was most votes of all tracks): THANK YOU ALL!!
During the day there were also numerous smaller discussion on the subject, so this made me feel very proud too.

Next I had a very though choice. Iris Pinkster did her presentation on Lean Test Management and Martin Pol on How to successfully Oursource Testing. I chose the latter. Since I will see Iris on EuroSTAR also when she's doing a Tutorial on the same subject and I won't see Martin there. 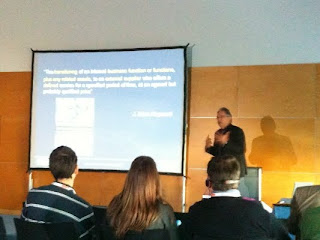 Next was the famous coffeebreak. It's amazing how much and how good the extra food and sweets are here. There's so much choice and if I didn't restrain myself I would certainly have 'pigged out' on the varous delicious sweet pastries.

After the break I went to see Jan Fish, again after a though choice, because 'Celestina Bianco's, Agile Validation for Medical Device?' seemed very interesting too. Jan Fish (USA) had a presentation about going to CMMI level 1 to 5 for QA in less than four years. And I AM very interested how she accomplished this. Three things I like to mention here are:
- Enable your people to grow
- Documented unit tests are rare
- Sticky Minds article from 30th of December 2008 by Michelle Sleiger 'Questions you should ask'
I know this is a bit out of context, but also look at the slides and the description of here track and you'll get the picture. Jan Fish is a very nice lady, and I'm glad to have met her (during the conference dinner last night I joined her (and husband's ) table and had a very good evening. She also very natural and dynamic on stage and doesn't hesitate to come of stage to approach someone in the audience that has a question. 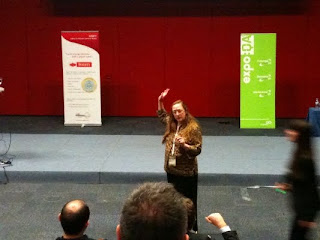 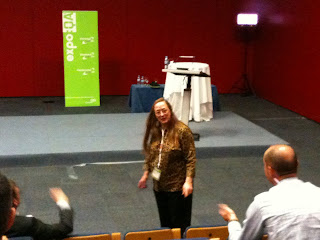 The next track I went to was 'Help, We have QA problem!' by Niels Malotaux. That wasn't a though choice since I already volunteered to track-chair this track. I thought it was a very clear, very sound and easy to understand presentation. And others thought so too, because this track was rewarded with the Delegates Best Track award. I would like to mention here that you should read 'Deming' and two quotes:
- Let's DO something about it
- It's our business to make people HAPPY. 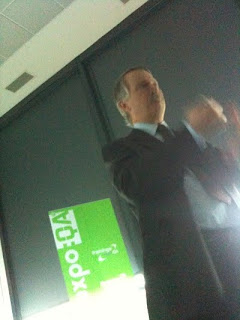 Dynamic Niels during his presentation...

After a great lunch, with - YEAH!!!- TAPAS again (It's really excellent lunch here!) I went to Isabel Evans' Keynote about 'Growing our Industry: cultivating testing'. It was a typical Evans keynote, easy to listen too, great stuff and very passionate about both horticulture and the testing profession. It was no surprise here that Isabel's abstract was rewarded BEST by the technical committee.
And I was very proud that the Ethics Debate was mentioned a couple of times here in relation to the contents of her keynote.
Some other things I wrote down during the keynote:
- Isabel was inspired by the level of passion and level of control combined in the Flamenco show last night.
- We are here to make the next Generation of tester even better
- Professionals have a known level of competence
All I can say is: Go see this keynote if you have a chance! 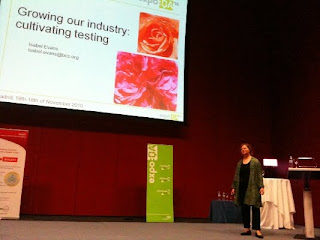 I planned to go to 'Ignacio López Carrillo's "How can you demonstrate savings from software tests?". But I ran into Derk-Jan and some other people which I had a really good social talk with. So I decided to skip the last track. It also gave me a good oppurtunity to say goodbye to some people who had to leave somewhat early of right after the conference. Luckily Derk-Jan was pursuaded to stay during the closing of the conference because his abstract got a special recognition from the technical reviewing committee being the most mentioned one! (Isabel Evans got 'best abstract').

At the closing of the conference I saw a familiar image... It was the Expo:QA cartoon from Andy Glover, a.k.a. CartoonTester (recommended blog!!!) 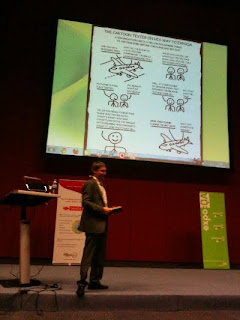 The prizes were handed over, the delegates, speakers and chairs were thanked and than there was a farewell coffee (again: great pastries!)

And that concluded the conference Expo:QA 2010.
I really hope to be able to attend again in the future, since I found this a very intimate and relaxed, well organized conference (about 300 delegates).

When we left for the bus to bring us to the hotel again. I approached Geoff Thompson on an idea Isabel had invoked during her keynote and I think you can expect more from this in the future! We already had a ball with the first ideas of this concept, which I'll keep a secret for now... (btw Geoff is partipating in 'Movember': this is a moustache growing sponsoring event regarding prostate cancer during the month november; please feel inspired to sponsor participants of this initiative!).

So... next I'll be blogging about will probably be my EuroSTAR 2010 adventure in Copenhagen. Hope you will tune in again then!