Tuesday afternoon, the conference is about to start with the opening from John Fodeh.
People are coming in at the registration desk and I 'lurk' in the main hall to see the faces of all those people coming in; are they as exited as I am? Because I helped make the program I'm specifically very curious and anxious about delegates' reactions. Some of them are in time to grab a bite in the expo hall, where the tutorial guests are still having lunch until the conference is opened. 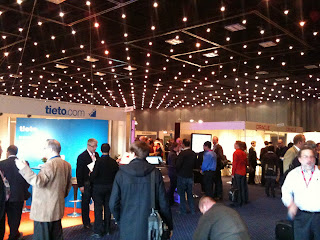 I really like that Cognisant has placed a web village in the main hall. Earlier this year I mentioned the idea of a tester's lounge or a tester's café so that people could relax a bit and have conversations/ discussions (which for some reason goes better on an easy chair than at a standing table :-) ). It was however a question if the venue would allow such a concept AND if there would be funds to do this; apparently Cognisant wanted to do something different than a normal booth, so 1 and 1 got Web Village. Particularly cool because of the Barrista that was in there with a professional coffe machine, the BlogSTAR throne and the twitter screen.

In one corner of the main hall the CartoonTester had his gallery, which was also very cool. Missed it? You can still look at the cartoons on: cartoontester.blogspot.com. 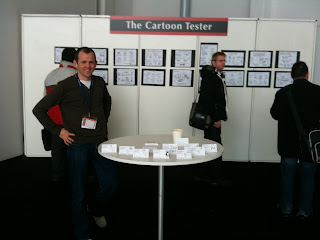 After lunch and lurking I went to the main auditorium to see the opening of EuroSTAR 2010. 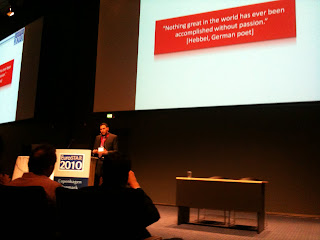 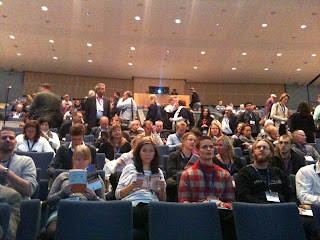 After this there were two keynotes.
The first one was of Antony Marcano (Putting Tradition to the Test: The Evolving Role of the Tester) 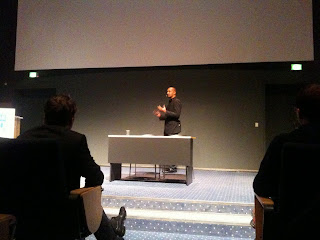 He started with three stories and had a bit slow, but calm voice. At the end the three stories collided and all three were actually connected to eachother in a certain way. There were three main messages here:
1) Roles become dynamic
2) Traditional roles change
3) Collaboration is key
For some vague reason people in the audience were assuming there would be no time for questions. There was one tweet and then a whole group was tweeting that there wasn't going to be time for questions and were very 'agressive'/'negative' about it without having verified if this was true. Of course there WAS time for questions, so the assumption was wrong (never assume as a tester?) and I also thought it was again a lesson that a tweetstream can actually spread wrong (and also correct) information in a amazingly fast way.

The next keynote was the one of Rob Sabourin (Monty Python's flying testcircus). Rob is a very dynamic speaker, very different than Antony Marcano who is very timid and relaxed. Rob is almost 'explosive' compared to this speaker and it makes the keynotes that more interesting that there is this difference.
I found the message of testing icw Monty Python's lessons a bit far fetched, although a lesson could also be that we can find lessons and relations in almost everything as long as we think creatively. And I love Monty Python, so this was a fun one; but a bit lazy and easy from the presentation and content side view. A lesson I got out of it was that of illogical or weird reasoning which eventually gets to the point that they have reasoned that a duck weighs the same as a witch (there are more ways to get to a point :-) and whatever works for you is good) 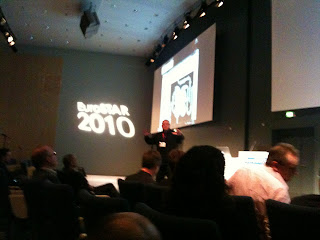 After the two keynotes there was a coffee break (with sweet cake again :-) ).
And after the break there were the first tracks to be chosen.
I first checked all the rooms if all speakers/chairs were all right and could start with their sessions and then I sneaked into the session of Derk-Jan de Grood (Nine causes of losing valuable testing time). Derk-Jan does a good job on stage, he has a lot of visible passion and is very dynamic, although he sometimes has a tendency of going too fast. This time he ended his session - alas- 20 minutes early leaving the audience a bit flabbergasted. It was not his fault; his chair had timed badly; giving him the timing signals 20 mins before it was actually the time, resulting in a very fast track. He also only mentioned 5 causes; because the other 4 where apparently not for testing but management related, I think he could have mentioned this a bit more clearly. Nevertheless, his story was clear and had good points. 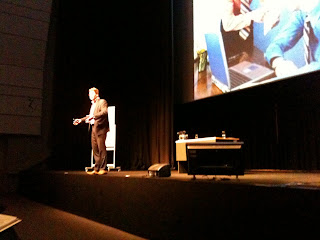 The next track I skipped; I ran into a lot of people who I had a chat with, checked the testlab (which was unfortunately not in the centre of the Expo/ conference, but a bit more 'in the background') and drank a good coffee from the barrista in the WebVillage.

I waited at the expo until the delegates returned to the Expo hall for the conference drinks and had a couple of drinks while chatting along with some more people, asking them how they liked it so far. There were some good responses and some improvements points. It seemed that the more experienced people missed the really advanced topics and some people didn't got the info they had hoped to see in a track, but other people had really enjoyed themselves, whether it was in the testlab, meeting people or attending tracks.

Afterwards I went to the city with Paul Gerrard, Neil Thompson and Suzanne Windsor and had a great dinner with them at an Italian Restaurant.
Afterwards I heard I had missed out on the Danish Alliance (you can read some other good blogs about this event), and I saw some excellent tweets pass by.
Nevertheless I had a great time with 'the Brits' and didn't go to bed too late so I would be fresh for the Wednesday!