Mondaymorning, started with a too expensive, but good breakfast (if you have the oppurtunity to get 'inclusive' or are in the centre of Copenhagen and are not a 'breakfast- fan', you might want to reconsider having a buffet breakfast because it's relatively expensive)
But enough of that; you probably got the message that I'm a frugal Dutch and find everyting amazingly expensive here ;-)

The first thing on my mind this morning is actually : DARN ITS COLD!!! it's not the temperature itself but the winds that make it really a though walk to the conference centre. There's a hotel being build right next to the centre, and this -alas- means you have to walk all the way around to the entrance of the centre. The positive side is that you are wide awake when you arrive there and in desperate need of some hot beverage. (I'm not saying "ANYthing warm" again because of some indecent proposals and odd smirks I got after mentioning this) 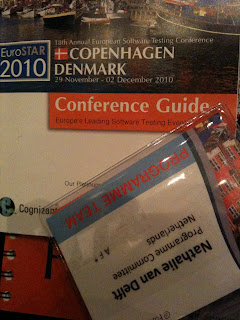 I had chosen the tutorial of Rob Sabourin to attend. There were many excellent choices though (see program on EuroSTAR website: http://www.eurostarconferences.com/conferences/2010/monday-full-day-tutorials.aspx. I knew I had to leave a bit earlier before the breaks and get in a bit later after (checking if the rest went ok :-) ) but I got the message that was send.
The one thing I found a pity was that it seems like this was a tutorial intended for more days. The first day was stuffed in the timeblock before lunch and the rest was stuffed in the time after lunch. The exercise (only one) was a bit scarce; especially for a whole day tutorial.
The exercise was fun though; especially the part of ALL the requirements and documentation of the WRAP-O-MATIC (believe me: its very extensive and very complete), I also liked the part where I had to 'play' the customer who would be buying this machine and determine this way which requirement we thought of earlier was the most important when having this role.
Luckily Rob Sabourin is a very enthusiastic and inspiring speaker so people got to have a good time and the messages that were given during the tutorial were usefull.
That the tutorial was well perceived was confirmed later in the conference during the Gala Drinks, where this tutorial got the 'best tutorial prize'. 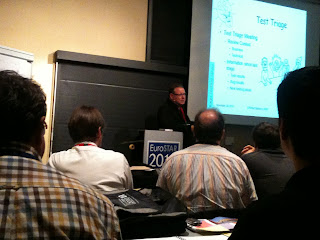 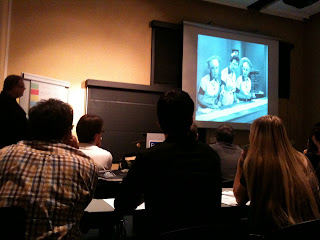 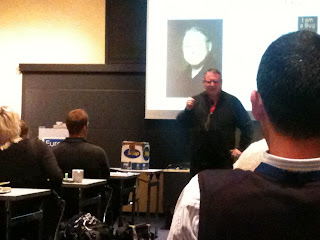 Oh, he got to show some EDS commercials during his speach wich were absolutely brilliant! (he actually had LOADS of movies and clips on his laptop)
The first is about CAT herding (not cattle herding :-) ) YOUTUBElink, the other two were about outsourcing and security (I couldn't locate them on Youtube, so this is something you'll have to do yourself)

The lunch during this day was a 'seated' lunch. The main was 'cockerel with mushrooms and a small tart of potatoe and thyme gravy', then there was a chocolate pyramid (which was less chocolate than expected) and then coffee.
The coffeebreaks were in the morning accompanied with 'sweet danish' and in the afternoon we had 'carrotcake' (the Danish really can bake sweet stuff!)

On Tuesday I started with a 'checking round' to see if all tutorials had started ok, before attending my own. In one of them I stumbled upon a romantic scene with candles et al. I guess this was the one from Morton Hougaard - Passion And Stress…The Siamese Twins - Stress Coaching For Testers.
The (half-day) Tutorial I attended was the one of Lee Copeland (Pragmatic Testing: When Your Testing World is Messy)
and it went by really fast. I think Lee is a great speaker who has great stories to tell and has excellent metaphores and examples to emphasise his story. The most dominating message was 'There are no best practices' (only good practices depending on a certain context). Another message worth while is that 1 hour of inspections will save you at least 8 hours of work later on in the development. This is a fact proven over and over again during the past decades. "As tester's we have forgotten our history" and the 5-why technique were other snippets from Lee's tutorial. 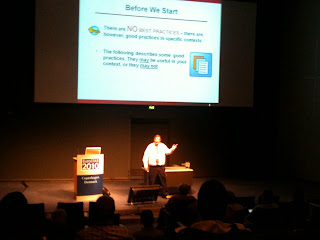 After the tutorial there was lunch in the expo hall, which had now been totally set up (I saw it develop during the monday :-) ). The lunch was a really good buffet with good quality food and a small dessert. I met a LOT of people (being a program committee member has an effect apparently of attracking people ;-) ) all of which I had nice, interesting and fun conversations with. And with this lunch I conclude this 'chapter' of my EuroSTAR diaries; I will continue with 'the conference day's' in the next chapters.