It's already Wednesday and the second day of the conference is about to start.
I went to the Bella Centre early and luckily stumbled into a pre-conference meeting about TMMi level 4 and 5 (where Geoff Thompson made me stay because I ate a 'Danish pastry' ;-) and the trade was: Danish yes = mandatory stay ;-) )
So I heard al about the brand new TMMi developments.

Because we (programm committee) forgot to mention the evaluation forms during the first conference day, Peter Morgan made papers for the chairs (to put on stage) to make sure they mentioned these evaluation forms that day. I had the task to bring those papers to the different rooms and was a bit late apparently because different sessions had already begun.
I sneaked into 'Dirk van Daels', Test Accounting. He's my colleague and although I'd seen the presentation before I was really keen on supporting him as a fellow Capgeminist. So, I heard all about 'the Compas' and a sheet where you can keep 'book' of your testing stuff through the whole development life cycle and the status of something in this particular life cycle. Dirk did a good job, I know him (of course) and I saw he had trouble to 'follow the red thread' and that it made him a bit more 'static', but believe me that if he hadn't done that, he would have knocked your socks off with so much info that he probably wouldn't have had enough time if he had whole day :-) 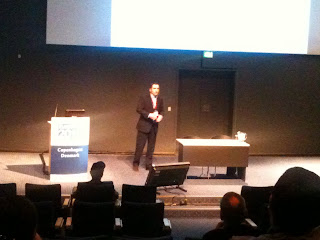 After the session I had a chat with Dirk about how it went and I finished by task of the 'evaluation papers'. I didn't attend one of the next tracks, I had planned to sneak into Palak Kedia's (Testing from a critics perspective) and then top-it-off with the final notes of Ken Johnston, but I ended up going round the conference- and expo spaces, only having a quick peek at Palak (who seemed to do very well and was glowing on stage) and didn't see Ken Johnston at all. But I had some good coffee in the Web Village and had plenty of time to get prepared for the hot topics panel session. I even got a chance to step over the doorstep of the TestLab (and got a test lab rat button!) and have some converstations with Bart Knaack about the progess and fun there!. 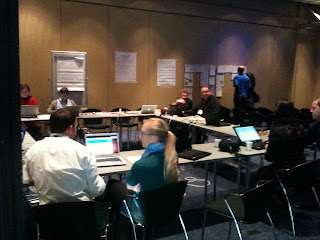 The hot topics panel session was to be live transmitted from EuroSTAR. John Stevenson had provided the idea of a separate hashtag for this panel (#esconfsEP) so people could easily provide topics during the conference and the discussion itself; there was also a Facebook page to submit hot topics and a whiteboard in the expo hall. The panel consisted of 5 experts and a moderator: Antony Marcano, Julie Gardiner, Michael Bolton, Tim Koomen and Rob Sabourin as experts and Lee Copeland as moderator/ leader of the pack. I had the task of tweeting the topics discussed and trying to get good topics to Lee if the previously provide topics ran out. It was more difficult than anticipated; tweeting went well, but when I had to reroute the questions to Lee I could not tweet, so this resulted in tweet-silence and I missed a couple of topics. Lesson learned for next time (if any) is that you have to have at least two twitterers to do this. I found the experience fun though and I think attendees had some fun too as well as the panel members themselves. And yes I also got the tip to involve the audience in the room a bit more, so this is a lesson learned too.

Next after the hot-topics panel was Ajay Balamudugaras' track on WeekendTesting. I don't think it needs a lot of introduction or even a description because I think it has already done great marketing on it's own. The concept is great and well thought of. I saw Ajay radiating passion for this topic, it really inspired me to see that genuine inspiration and commitment to the subject. I can recommend the participation on a Weekend/ Weekday testing session to all testers; it gives you the opportunity to practice testing in a safe environment and to share your enthusiasm, knowledge and ideas with others attending. I felt invigorated after attending this session, humbled and heavily inspired. For more info on Weekend/ Weeknight testing please visit: http://weekendtesting.com/

After the - again excellent lunch- I went to Graham Thomas' track (workshop) : The Tester's Toolbox. I volunteered to trackchair this one because I really liked the abstract and I like Graham as a speaker. I had a busy session, running around with a microphone and intensive timekeeping, but it was worth it by far! Graham has this wonderfull ability to be very stoic, a bit ironic and sarcastic and then throw in this humour in such an easy manner that it is guaranteed to make you laugh during a learning experience! This workshop really didn't let me down, I had immense fun doing the exercises, fun with the mind-stuff and fun with the food-for-thought. Never thought that I wouldn't be able to distinguish black from white! Graham also had a little surprise for Michael Bolton who attended the second part of the workshop: a sheet with a word-cloud and all words stated : "process". I heard a huge laughter behind me when the sheet was shown, so I guess the joke was appreciated. A nice tip: look on WikiPedia for 'optical illusions', you can have a days worth of fun there!

After the coffeebreak I went to see Stuart Reid's keynote: When passion obscures the facts... I think it has been the most pre-discussed track of the whole conference. Since the publication of the abstract there has been numerous blogs, tweets and forumconversations on this keynote and it's presenter (even on very personal level). I think that even if Stuart had been presenting a whole different content even then the 'contra-group' wouldn't have given him a change and would be blogging/ tweeting negatively about it. Fortunately there are still open minded people who don't just tweet or blog everything in a specific (prejudiced) mindset and where willing to listing to the plea made by Stuart and wait with comments until the whole story was done. I must admit I was a bit disappointed in a way; it took a long time to make the opening plea, which could have been shorter. I also expected a bit more scientifically under build story, I think he could have made a stronger case. I had the idea that indeed Stuart was SO passionate that facts got obscured.
On the other hand I was touched by the fact that Stuart really was passionate about his subject, was genuinely there for his topic (which some other speakers/ delegates in my opinion did not have, but where merely/ mostly quoting another man's opinion) and I found him courageous to pick up this topic, although it didn't quite work out they way it should have, I think. The main message I got from the keynote was that we should investigate and find evidence (make a solid case) to engage in a specific way of testing (not just do anything) whether this is testing in the context-driven way of testing or the traditional school of testing (to use the word 'school' in this case :-) )
The thought I had afterwards was: What a pity that people in general are so divided in two different schools. It should be AND in stead of OR. I think the context-driven mindset is an excellent addition to the traditional mindset (an vice versa) and are complementary. Alas people are apparently blinded. So it wasn't the keynote itself that made it the most valuable experience but the whole discussion around it.

The last keynote was the winner of last year's best track: The SuperTesters (a slightly true story). I saw it in Stockholm AND I saw it at TestNet in NL, so I passed this time, having a discussion with Michael Bolton on the evidence-based keynote on which he made some valid points, but I wasn't in need of convincing (sry Michael, I just wasn't in the mindset at that time). I saw some huge smiles however of people coming out of the auditorium, which made me smile inside!

After this keynote everybody (who had a ticket) hurried to the Copenhagen Town Hall for the Gala Event. The town hall of Copenhagen is a truly beautiful building and is a special treat for testers, since the architect has ordered his craftsmen to insert minor flaws in their work (imagine that huge group of tester looking very intensely to the building to be able to be the first to notice the flaws :-) )
During the ceremonies three prizes were handed out:
The best tutorial: Rob Sabourin
The best paper: Isabel Evans
and - the most prestigious - The European Testing Excellence Award: Paul Gerrard.

After the formalities the group went upstairs. We were divided into two groups: one could take the 'common' stairs and one could go via the 'noblesse' stairs. This latter had a phoenix at the entrance which guarded that only the pure of hearts could enter. I think I saw all testers upstairs, but I'm not quite sure. I was glad I was to go via the 'common' stairs :-). In a most beautiful hall a buffet with Danish food was served and everybody was chatting wildly with each other.

After the GalaEvent. I started out following the Danish Alliance group, but I lost them when I had to wait for a red traffic light (I couldn't go that fast because it was very icy and I wore high heels) and my shouts were not as loud as the traffic was. When it went green again, the group was gone.
I didn't feel like searching in the cold, so I went to my hotel and called it the night. It had been a very exciting day!

ps: sorry I don't have that many pictures of this day; the ones I made later this day were all so bad, I couldn't possibly publish them with any decency.